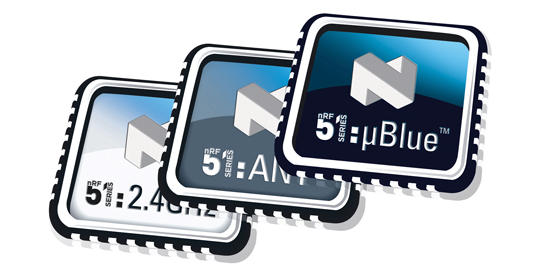 This major benefit is achieved by using a new and novel software architecture featuring a unique and powerful separation between protocol stack and user application code. This separation provides developers a clean boundary between application and protocol stack, and removes the need to struggle with integration of application code as part of a vendor-imposed application development framework. Code development is now greatly simplified and accelerated and at the same time risks associated with integration of application and stack code are significantly reduced. Customers can expect lower bug rates and improved robustness for their applications.

With the launch of the Nordic Semiconductor nRF51 Series, developing applications based on class-leading devices from any of the three main ULP wireless sub-categories – Bluetooth low energy, ANT / ANT+, and 2.4GHz proprietary RF – has never been so straightforward or accessible to the widest possible range of developers.

About the nRF51 Series

Key features and benefits of the radio include:

Key features and benefits of the architecture include:

All nRF51 Series ICs are code-compatible and groups of ICs will be pin-compatible enabling developers to keep and maintain a single code base that can be used and re-used across a range of different projects. Pin compatible ICs enable developers to both re-use hardware designs for different projects and migrate easily from one IC to another during development, prototyping, and production.