Toshiba Memory Europe has expanded its widely-acclaimed XG5 lineup of NVMe solid state drives (SSDs) that are based on its 64-layer, 3D BiCS FLASH memory. The new XG5-P is a premium sub-series that doubles the capacity and is tuned to improve full access range random read/write performance by up to 55 percent[1] over standard XG5 SSDs. The XG5-P series is designed to meet the needs of demanding PC, gaming and content delivery workloads and offers up to 2 terabytes (TB)[2] of storage capacity while maintaining the characteristics of ultra-thin, high-speed storage with exceptional power efficiency. 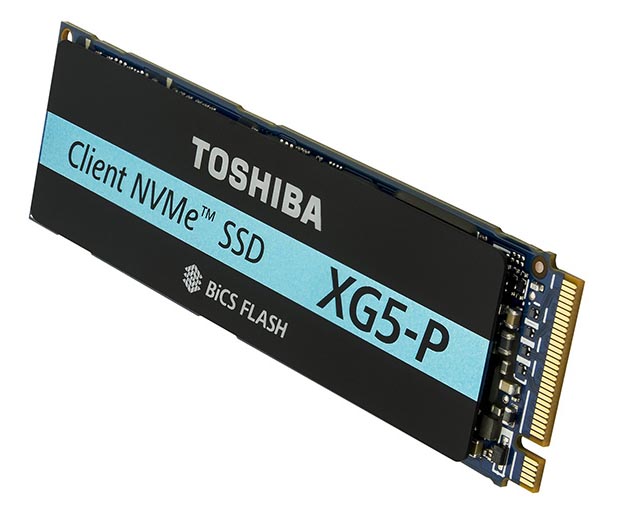 As Toshiba’s first 2TB M.2 SSD, the XG5-P series utilizes an in-house developed 1 TB package solution that offers up to twice the maximum storage capacity of the standard XG5 series on the same 2.23 mm thick single-sided M.2 2280 module. By maintaining a single form factor for all capacities across the complete XG5 and XG5-P product family, Toshiba makes it easier to design platforms that need flexible storage.

“Toshiba recognises the need for engineering larger capacity, higher performance SSD solutions that target specific applications and use cases,” said, Montserrat Neira, SSD Marketing at Toshiba Memory Europe. “With our latest flagship XG5-P series, we have once again raised the bar in client SSD storage by delivering NVMe SSDs that take workstation, gaming and content creation performance to the next level.”

Engineered with the reliability and stability that are hallmarks of Toshiba’s SSDs, the XG5-P series will be available in 1 TB and 2 TB models. Self-encrypting drive (SED) models[7] supporting TCG Opal Version 2.01 will also be offered, making the XG5-P series well- suited for a wide range of applications that prioritize performance, as well as business applications requiring security.

[3] PCI Express and PCIe are registered trademarks of PCI-SIG

[7] Availability of the SED model line-up may vary by region.

* Information in this document, including product prices and specifications, content of services and contact information, is current and believed to be accurate on the date of the announcement but is subject to change without prior notice.

* Company names, product names, and service names mentioned herein may be trademarks of their respective registrants and/or owners.