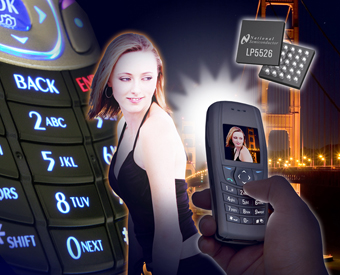 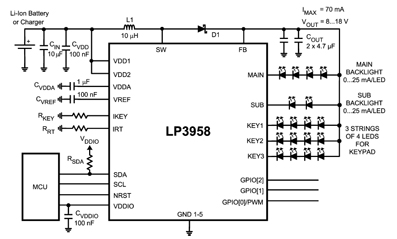 In single and dual displays, the LP3958 LMU drives up to eight white LEDs grouped as four series-connected LEDs per string, with typically one string per display. Display backlight fade in and fade out is controlled via a two-wire, low-voltage, I2C-compatible interface, allowing easy software implementation. The GPIO functions enable the user to control external devices. The serial interface reduces the wire count through the hinge in flip cell phone designs. For keypads, three series-connected LED strings of up to four LEDs each can be independently controlled to enable light segmentation. This is particularly useful in gaming and navigation applications, for example, in which individual buttons can be selected for illumination.

The LP5526 has the same features and packaging as the LP3958 and can drive multi-die serial-flash LEDs in camera Flash (up to 3W of power) and torch applications. Also, in the case of a software problem, the LP5526 features an internal safety timer to protect flash LEDs from aging. With the LP5526, the Flash LED output can also be used to drive single or series-connected RGB LEDs.