Toshiba Electronics Europe announced the launch of a range of general-purpose system power ICs with multiple-outputs. The new devices support functional safety according to ISO26262 for safety-critical automotive applications including those that require extremely high safety such as electric power steering systems (EPS) and braking systems where ASIL-D is required. 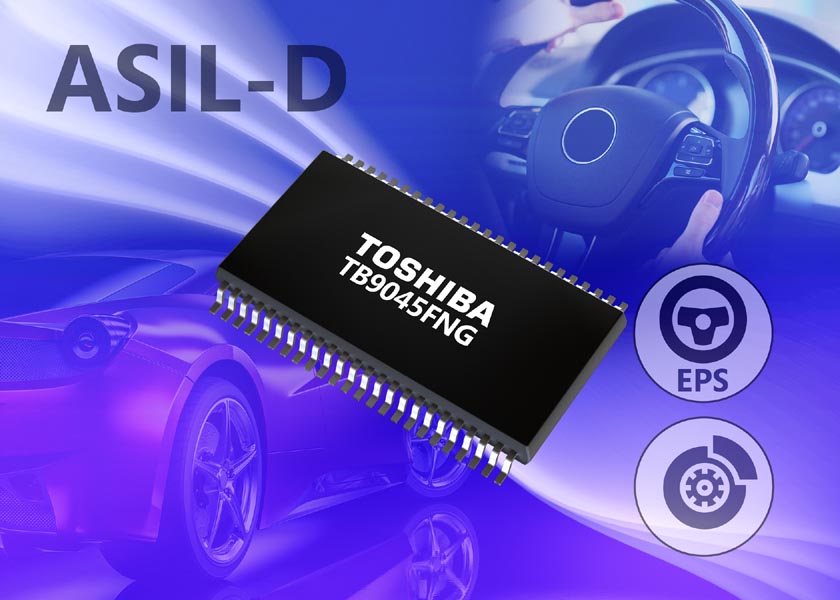 A buck-boost converter generates 6 V from the automotive battery and is capable of operating with input voltages as low as 2.7 V to ensure constant voltage, even during cranking operations when the battery voltage drops significantly. The devices are suited to input voltages as high as 18 V and can operate over the temperature range –40 to +125 °C. They are housed in a tiny HTSSOP48-P-300-0.50 package, measuring just 6.1 mm × 12.5 mm × 1.0 mm making them ideal for modern densely packed automotive applications.

The TB9045FNG series includes a range of fault detection features, essential to providing functional safety. This includes over voltage for the DC-DC converter and under voltage lockout (UVLO) for the battery power supply as well as thermal shutdown and a circuit to monitor the oscillator frequency. A watchdog timer is included to detect errors on the external MCU as well as the ability to detect latent faults that would indicate a potential failure. Reporting of any issues can be configured via the SPI interface using a dedicated register, allowing the IC to be used in a wide variety of systems.

To support designers, Toshiba provides a full suite of documentation including a functional safety FMEDA to assist with safety design and analysis of systems.

Volume production for the new power ICs is scheduled for November 2019 with a planned capacity of around 1 million units annually.