There has been many developments of Arduino based motor controller boards and shields. They work great with most low power motors but when you need to do more serious motor driven project, then you find that most of those shields aren’t capable to drive bigger motors. Arc Robotics decided to change situation by offering affordable 43Amp Arduino motor shield. 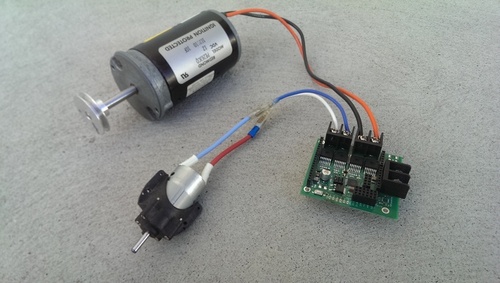 They are running kickstarter campaign. They designed controller to be flexible, powerful and easy to use. Arc-Controller can run as standalone motor driver because there is an Atmega328 Arduino compatible microcontroller. Controller can also be attached to another Arduino or other board as slave device and accept commands. It is able to drive single stepper motor up to 43Amps or couple DC motors. Controller has all necessary fail-safes installed like reverse polarity, over temperature and over current protection. Seems to be great choice if you seriously thing diving in to robotics.

There have been a lot of amazing projects come out of the Maker revolution, however, many are limited by the capability of their motor controller. We want to change that. The Arc-Controller is a bridge to bring high Amp motor control to your projects, up to 43 amps with a heat sink. It is capable of variable speed and direction control over a single Stepper Motor or two DC motors, because when do you only need one motor.

The Arc-Controller is compatible with about any Arduino, or other micro controller such as Raspberry Pi. It runs an ATMega328, and is user programmable via the Arduino IDE. Thanks to the ATMega the Arc Controller can run as a standalone micro controller or be slaved by any other device. Giving Makers the ability to push the limits of what has been done and change the power to change the world.

What makes the Arc-Сontroller special?

The Arc-Controller can run 2 DC motors or a Single Stepper Motor. It has control over a full range of motion, fast, slow, forward, and backward.

The Arc-Controller built around two H-Bridges. Each one can supply 43 amps of continuous current, with a properly mounted heat shield. The dual H-Bridges run separately, controlling two high-end DC Motors or as one controlling a single stepper motor. 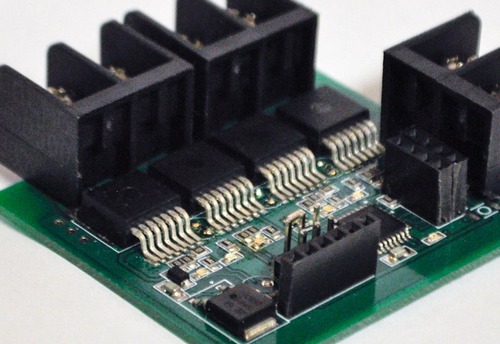 Built into the H-Bridges are current and temperature fail-safes.  If they begin to get too hot, or if they exceed the maximum current levels, current limiting will take affect. They will automatically shut down until they cool off, or until conditions are safe to operate. We also have included a reverse polarity protection, just for those bad days.

There is an integrated circuit on board that gives a current reading from the H-Brides to see how much current each individual motor is using. This gives you the option to write your sketches to react under certain loads, detect shorts and over heating states.

The ATMega328P, is the same chip found on the Arduino Uno, and is the brain of the Arc-Controller. it also gives you the ability to work with a wide range of inputs such as analog inputs, digital pins, I2C, ISP/ICSP, FTDI, and serial communication connections. Each has been labeled and made easily accessible on the Arc-Controller. 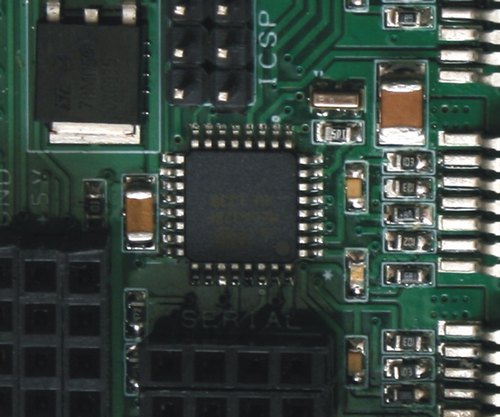 User programming using can be done using the Arduino IDE, using the ISP/ICSP port or using the FTDI serial port. You can upload your personal sketches just like you would with the Arduino Uno.

Thanks to the on board ATMega you can use the Arc-Controller to, prototype motor control sketches, use it as a standalone micro controller or use it as a slave of any other device. Giving your projects the ability to test the limits of your imagination.

The Arc Controller is designed to work seamlessly with multiple Arc Controllers or other shields stacked on to a single Arduino Uno. All the Arduino Uno pins, except the I2C pins (A4 & A5) are available for your project. Pins A4 and A5 on the Uno are the I2C communication pins and can be connected to other devices like gyros and accelerometers and which can be shared by up to 128 devices on this bus at the same time.

We are creating a simple library that can be used to easily send commands to the Arc Controller. These commands can configure the Arc Controller to run a stepper motor, drive two brushed DC motors, and even an integrated an XY thumb stick “Arcade Drive”. The interface library will take input from you and transmit it to any number of connected Arc Controllers.

In addition to the i2c interface we have the digital and analog inputs that can be used to accept several types of input. The default program will accept direct input from your favorite RC controller using PWM (pulse width modulation), Analog input from 0-5 V or communication form the i2c. Our goal is to have the desired input method auto detected at boot-up. Your imagination is the only limit with any of the interfaces, there is nothing in your way!

The input voltage maxes out at 27 volts. The Arc-Controller supplies a 5 V 500 mA power output with a resettable fuse so you don't need to worry about a secondary power supply for your Arduino or any other 5 V device.