The Window Lift with Anti-Pinch design provides bidirectional control for the window lift motor with minimal passive components, with the ability to implement anti-pinch in the software.

Hard-wired switch inputs, as well as LIN commands, can be used to control the two output relays. 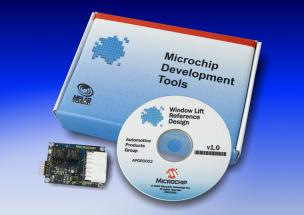 This module consists of a microcontroller, power supply, relays with their associated drivers, input conditioning circuits and network physical interface.
LIN commands are sent via the LIN bus. Programmed with the standard firmware, the module responds to LIN 2.0 message frame of two data bytes and classic checksum (checksum only includes data).

The microcontroller can be any one of the 14-pin PIC device family members, but in this instance, it is a PIC16F688. The PIC16F688 has an Enhanced Addressable USART that supports the Local Interconnect Network (LIN) and SAE J2602 protocol.