ArticlesWind Energy
A Wind Turbine Without …

A Wind Turbine Without Blades

Vortex Bladeless uses a radically new approach to capturing wind energy. The device captures the energy of vorticity, an aerodynamic effect that has plagued structural engineers and architects for ages (vortex shedding effect). As the wind bypasses a fixed structure, its flow changes and generates a cyclical pattern of vortices. Once these forces are strong enough, the fixed structure starts oscillating, may enter into resonance with the lateral forces of the wind, and even collapse. There is a classic academic example of the Tacoma Narrows Bridge, which collapsed three months after its inauguration because of the Vortex shedding effect as well as effects of flattering and galloping.

Instead of avoiding these aerodynamic instabilities, this technology maximizes the resulting oscillation and captures that energy. Naturally, the design of such a device is completely different from a traditional turbine. Instead of the usual tower, nacelle, and blades, the device has a fixed mast, a power generator, and a hollow, lightweight, and semi-rigid fiberglass cylinder on top.

This wind generator does not have any moving parts in contact, which eliminates the need for lubrication and reduces the wear and tear. Also, it’s known that a structure can only have a certain frequency of oscillation, which limits the number of working hours. However, thanks to a self-tuning magnetic coupling system, Vortex can operate in a wider range of wind speeds. This system allows maximizing the oscillation amplitudes: when wind intensifies, the magnetic force of repulsion goes up, which reduces the distance between the rod and the magnet. As a result, the oscillation and the potential of generated energy increases to the maximum. With that, Vortex can automatically vary rigidity and “synchronize” with the incoming wind speed, in order to stay in resonance without any mechanical or manual interference.

One of the main advantages of Vortex is its dramatically low cost. In fact, the normalized cost of energy generation (LCOE) for a typical onshore facility is $0.035/kWh (about 35 euros/MWh), including capital costs, operation and maintenance, performance, land leases, insurance, and other administrative expenses.

This puts the technology at the very low range of capital intensity for such projects. It also makes it highly competitive not only against generations of alternative or renewable energy, but even compared to conventional technologies. 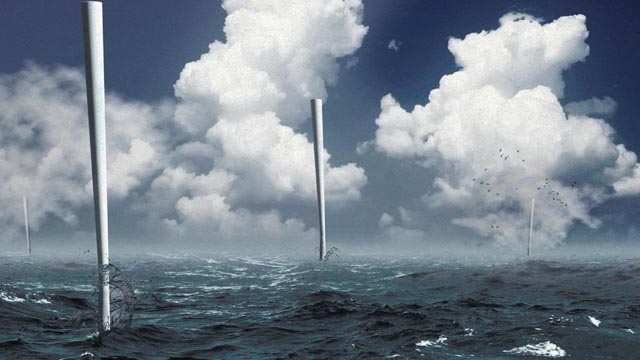 These cost reductions come from reduced manufacturing costs: the tower and the generator equipment are basically one and the same. This allows us to bypass the need for a nacelle, the support mechanisms, and the blades, which are the most costly components in conventional wind generators. Manufacturing savings are roughly estimated at around 51% of the usual wind-turbine production cost. The manufacturing, transportation, construction, and assembly are also simplified and are typical for the wind industry.

There is another differentiating factor that gives Vortex a competitive advantage over other field installations. By having the alternator (and the center of gravity) close to the ground, Vortex simplifies assembly operations, use, and maintenance. In contrast, in conventional wind energy, a typical gondola is mounted at 80+ meters above the ground. 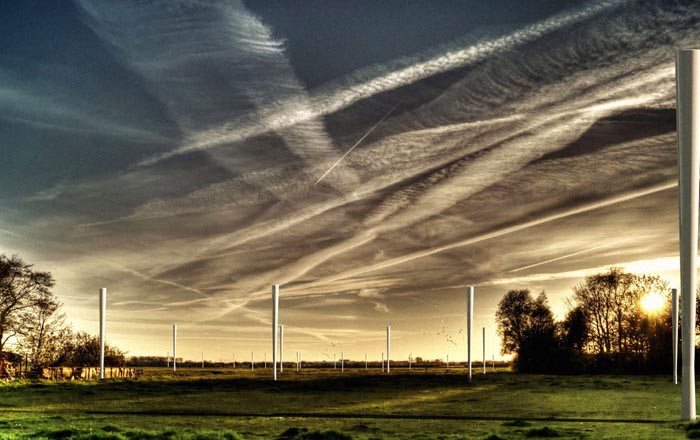 The design completely eliminates mechanical elements that can suffer wear and tear from friction, leading to an estimated 53% reduction in maintenance costs compared to traditional wind, avoiding changing oil or changing most of the mechanical parts along the 20 years of the multi-blade wind turbine’s life cycle.

Of course, it’s not immune to fatigue. The wind can cause twisting and displacement of the structure, primarily in the elastic rod, especially in the lower section that has to withstand greater forces. However, studies carried out by the company confirm that the stress on the rod is far from working limits of materials, i.e., carbon fiber. Computational modeling estimates operational lifetime of the installation to be between 32 and 96 years.

Vortex currently takes up as much as 30% of the area of a conventional generator, with maximum amplitude around a diameter at the top. It can capture about 40% of the wind power contained in the air, which is a more than reasonable capacity, and at the same height as many modern wind turbines. The system does lose some electrical conversion capacity (reaching 70% yield of a conventional alternator), because the design is so focused on avoiding and wear and tear.

In addition, the impact on the bird population is expected to be much smaller, because Vortex doesn’t require the same type or magnitude of movement as the traditional wind turbine, allowing for higher visibility.

With the oscillation frequency of the equipment below 20 Hz, the impact sound level is nonexistent, opening the possibility to make the future wind farms completely silent.

To demonstrate the feasibility of the technology, Vortex tested dozens of prototypes in wind tunnel, and Vortex Bladeless is currently optimizing the field tests to complete the small-scale equipment.

The first Vortex products will be focused on small-scale production. The first will be 100 W, 3 m (9.8 ft.) high and weigh less than 10 kg (22 lb). This system has been designed to bring energy to off-grid locations and matching it with solar panels. This is a cost-effective solution for homes with existing solar installations and where having a non-expensive wind device will help to store the energy produced while the solar is not producing. It will also work for communities where having energy could be a matter of life. This product, called Vortex Atlantis, will work at the beginning in a pilot program. Vortex will be the solar panel of the wind power.

The second product, ready to be produced in one year, will be also for small-scale production. A 4 kW Vortex, 13 m high (42.6 feet) and weighing less than 100 kg (220 lb), it’s also for an off-grid installation, perfect for a hybrid system, combining solar panels and using the same electrical converter.

The main goal will be reached in four years when Vortex will present a +1MW wind generator.

Vortex Bladeless is a Spanish tech startup that is developing a multi-patented wind turbine without blades. The technology has been funded by Repsol Foundation Grant, Spanish Angels investors, and a loan from the Spanish government. In April 2015, Vortex relocated to Boston and formed an Advisory Board with representatives from Harvard University (Chan School of Public Health), IDEO, TerraForm Power (SunEdison Group), and Dat Venture. At the moment, the company is negotiating with U.S. investors to run the next funding, Series A., Vortex will launch a crowdfunding campaign on June 1, 2015, to fund part of its commercialization process. Currently the company has 11 people working. The founders met several years ago. David Yañez is the inventor, Raul Marting organizes the company, and David Suriol runs the business.