Engineering labs are usually equipped with various power supplies, voltmeters, function generators, and oscilloscopes. One piece of equipment missing from many such labs, however, is a current source. This omission is unfortunate, because a current source is useful for creating I-V (current-versus-voltage) curves, charging and discharging batteries, preloading power supplies, and many other applications. 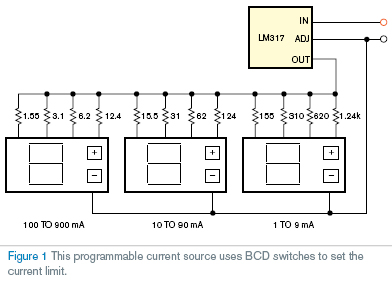 The circuit in Figure 1 is an easy-to-build, easy-to-use, low-cost current source. It comprises three sections of BCD (binary-coded-decimal) switches, a three-terminal adjustable regulator, a handful of 1%-tolerant resistors, and a National Semiconductor LM317 three-terminal adjustable regulator. All newer National Semiconductor regulators are of the low-dropout type, which is unsuitable for this application. The switches short their four outputs to a common terminal based on the digit setting of the switch.

The circuit operates as follows: Assume that the red terminal in Figure 1 connects to a 5 V power supply and that the black terminal connects to the power supply’s ground. Assume that the middle digit (labeled 10 to 90 mA) gets set to two and that the other two digits get set to zero. The BCD switch connects a 62 Ω resistor from the LM317’s output to adjust pins. The LM317 forces 1.25 V across the 62 Ω resistor, causing 20 mA to flow from the output pin through the resistor, and to the black terminal of the current source. The circuit maintains this regulation provided that the input voltage remains 3 to 40 V.

To construct the current source, you should either use a heat sink for the LM317 or build the circuit into a die-cast aluminum housing, which acts as the heat sink. Isolate the LM317 from the heat sink using a thermally conductive isolation pad and a shoulder washer. You determine the resistors’ values by starting with the base-resistance value, 1.24 kΩ. Then, simply use parallel values to determine the successive resistors’ values. For example, two 1.24-k Ω resistors in parallel yield 620Ω, four 1.24-kΩ resistors in parallel yield 310Ω, and so on. Using this approach with ¼W resistors ensures that the highest current resistors do not overheat. For example, eight 12.4 Ω, ¼W resistors yield 1.55 Ω resistance and dissipate only 1W with a peak capability of 2 W.

The performance of the circuit is about 2% accurate. You can achieve higher accuracy with hand-selected resistors. The output impedance for lower currents is more than 1 MΩ but drops to approximately 250 kΩ at 200 mA.