However, to my knowledge, printing white LEDs directly on paper using chemical methods is innovative.

PhD student at Linköping University in Sweden, Gul Amin has demonstrated in his doctoral thesis that white LEDs, made from zinc oxide and a conducting polymer, can be manufactured directly on paper. It is possible to print them on wallpaper, for instance.

The active components are nanorods of zinc oxide on a thin layer of polydiethylflourene (PFO), a conducting polymer. The paper has first been coated with a thin, water-repellent, protective and leveling layer of cyclotene, a resin.

Amin said he and his team realized a ZnO/polymer LED grown on a paper substrate and then extended the idea to print the ZnO nanorods/polymer hybrid LEDs with potential application to large area flexible displays. 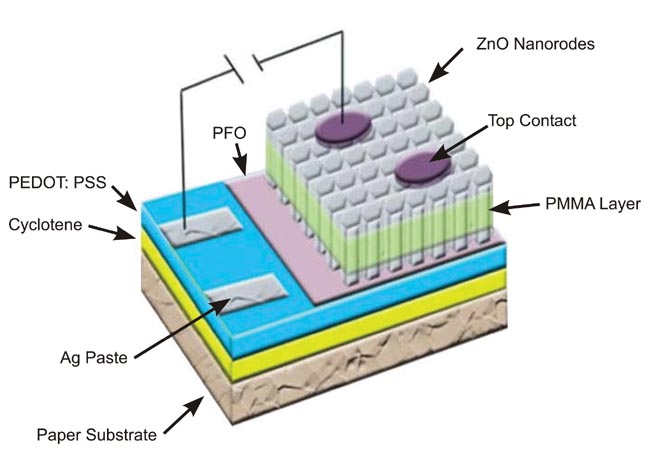 “This is the first time anyone has been able to build electronic and photonic inorganic semiconducting components directly on paper using chemical methods,” commented professor Magnus Willander, who is leading the research.

This method has a patent pending.