Forget to turn off the lights before leaving the apartment? No problem. Just raise your hand, finger-swipe the air, and your lights will power down. Want to change the song playing on your music system in the other room? Move your hand to the right and flip through the songs. 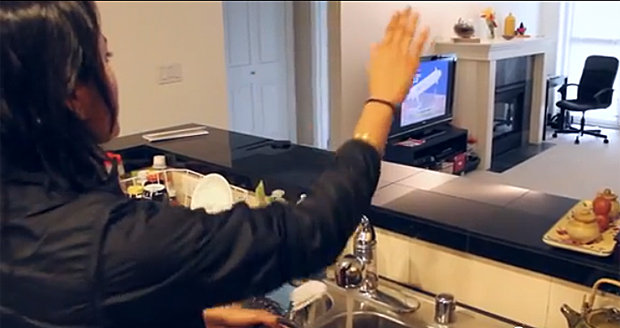 University of Washington computer scientists have developed gesture-recognition technology that brings this a step closer to reality. Researchers have shown it’s possible to leverage Wi-Fi signals around us to detect specific movements without needing sensors on the human body or cameras.

By using an adapted Wi-Fi router and a few wireless devices in the living room, users could control their electronics and household appliances from any room in the home with a simple gesture.

Scientists call this technology “WiSee”. The concept is similar to Xbox Kinect – a commercial product that uses cameras to recognize gestures – but the UW technology is simpler, cheaper and doesn’t require users to be in the same room as the device they want to control. That’s because Wi-Fi signals can travel through walls and aren’t bound by line-of-sight or sound restrictions.

The UW researchers built a “smart” receiver device that essentially listens to all of the wireless transmissions coming from devices throughout a home, including smartphones, laptops and tablets. A standard Wi-Fi router could be adapted to function as a receiver.

When a person moves, there is a slight change in the frequency of the wireless signal. Moving a hand or foot causes the receiver to detect a pattern of changes known as the Doppler frequency shift.

These frequency changes are very small – only several hertz – when compared with Wi-Fi signals that have a 20 megahertz bandwidth and operate at 5 gigahertz. Researchers developed an algorithm to detect these slight shifts. The technology also accounts for gaps in wireless signals when devices aren’t transmitting.

The technology can identify nine different whole-body gestures, ranging from pushing, pulling and punching to full-body bowling. The researchers tested these gestures with five users in a two-bedroom apartment and an office environment. Out of the 900 gestures performed, WiSee accurately classified 94 percent of them.

The system requires one receiver with multiple antennas. Intuitively, each antenna tunes into a specific user’s movements, so as many as five people can move simultaneously in the same residence without confusing the receiver.

If a person wants to use the WiSee, she would perform a specific repetition gesture sequence to get access to the receiver. This password concept would also keep the system secure and prevent a neighbor – or hacker – from controlling a device in your home.

Once the wireless receiver locks onto the user, she can perform normal gestures to interact with the devices and appliances in her home. The receiver would be programmed to understand that a specific gesture corresponds to a specific device.

In this way, a smart home could become a reality, allowing you to turn off the oven timer with a simple wave of the hand, or turn on the coffeemaker from your bed.

The researchers plan to look next at the ability to control multiple devices at once. The initial work was funded by the UW department of computer science and engineering.