Microchip Technology announced the expansion of its Arduino compatible chipKIT platform ecosystem, including a new Raspberry Pi tool that it co-developed with partner element14—the chipKIT Pi Expansion Board. On the software side, volunteers from the chipKIT and Arduino communities collaborated with Microchip’s engineers to expand the free chipKIT Multi-Platform IDE (MPIDE), to allow users to create, compile and program Arduino sketch-based chipKIT applications within the Raspberry Pi operating system. The chipKIT MPIDE is open source and compatible with the Arduino programming language and development environment. Both of these tools are based on Microchip’s 32-bit PIC32 microcontrollers (MCUs) in prototyping-friendly, low pin count SPDIP packages, which was previously only available with 8-bit MCUs for the Arduino community. This enables all users—including hobbyists, academics, makers and professionals—to benefit from the PIC32’s high performance, memory and integrated peripherals while using the basic hobbyist prototyping equipment that is found in most home workshops. 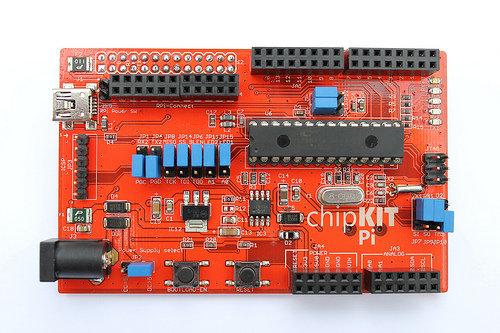 The Raspberry Pi is widely viewed as one of the easiest and most affordable computers on which to program, and recently shipped more than one million units in less than a year on the market. element14’s chipKIT Pi Expansion Board is the world’s first to enable the development of 3.3V Arduino compatible applications for the Raspberry Pi using a 32-bit, high-performance MCU in a prototyping-friendly package. Because the Raspberry Pi’s processor is a 3.3V chip, its digital I/O and communications (I2C, UART, SPI) pins require 3.3V. Meaning that existing prototyping-friendly Arduino boards, which are all based on 5V 8-bit MCUs, require users to create or purchase additional components to translate the voltages. The chipKIT Pi can interface directly to the Raspberry Pi I/O Expansion header without any additional components, reducing both cost and design complexity.

In addition to being 3.3V compatible, the chipKIT Pi is also the only Arduino compatible board that brings a 32-bit MCU in a prototyping-friendly package to Raspberry Pi users. Previously, hobbyists, academics, makers and professionals who wanted to develop Arduino applications for the Raspberry Pi using prototyping-friendly, through-hole packages were forced to use boards based on 8-bit MCUs. The chipKIT Pi’s 32-bit PIC32 MCU is in an SPDIP package, so even non-experienced users can easily swap out the pre-populated PIC32 with a new one—without having to replace the entire board.

The PIC32’s high level of performance, memory and integrated peripherals allows users to create applications with greater functionality, including touch sensing, audio processing and advanced control. Additionally, users can take advantage of the PIC32’s Peripheral Pin Select feature, which provides the flexibility to re-map certain peripheral I/O pins to suit their applications. The chipKIT Pi board and the Raspberry Pi compatible version of the MPIDE software further enable users to tap into the large repository of available Arduino tutorials, reference materials, curriculum and more, to create a diverse array of designs.

element14’s chipKIT Pi Expansion Board (part # chipKIT Pi) is priced at $28, and boards are expected to become available in the final week of September.