With photovoltaic polarizers, devices could be powered by sunlight, own backlight

We've all worried about the charge on our smartphone or laptop running down when we have no access to an electrical outlet. But new technology developed by researchers at the UCLA Henry Samueli School of Engineering and Applied Science could finally help solve the problem.

The UCLA engineers have created a novel concept for harvesting and recycling energy for electronic devices — one that involves equipping these devices' LCD screens with built-in photovoltaic polarizers, allowing them to convert ambient light, sunlight and their own backlight into electricity.

LCDs, or liquid crystal displays, are used in many of today's electronic devices, including smartphones, TV screens, computer monitors, laptops and tablet computers. They work by using two polarized sheets that let only a certain amount of a device's backlight pass through. Tiny liquid crystal molecules are sandwiched between the two polarizers, and these crystals can be switched by tiny transistors to act as light valves. Manipulating each light valve, or pixel, lets a certain amount of the backlight escape; millions of pixels are combined to create images on LCDs.


The UCLA Engineering team created a new type of energy-harvesting polarizer for LCDs called a polarizing organic photovoltaic, which can potentially boost the function of an LCD by working simultaneously as a polarizer, a photovoltaic device and an ambient light or sunlight photovoltaic panel. 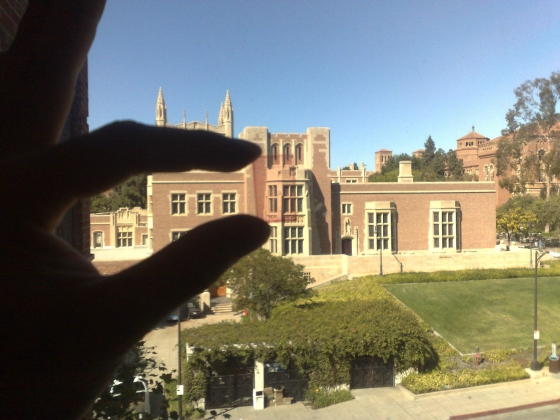 Their research findings are currently available in the online edition of the journal Advanced Materials and will be published in a forthcoming print issue of the journal.

"I believe this is a game-changer invention to improve the efficiency of LCD displays," said Yang Yang, a professor of materials science at UCLA Engineering and principal investigator on the research. "In addition, these polarizers can also be used as regular solar cells to harvest indoor or outdoor light. So next time you are on the beach, you could charge your iPhone via sunlight."

From the point of view of energy use, current LCD polarizers are inefficient, the researchers said. A device's backlight can consume 80 to 90 percent of the device's power. But as much as 75 percent of the light generated is lost through the polarizers. A polarizing organic photovoltaic LCD could recover much of that unused energy.

"In the near future, we would like to increase the efficiency of the polarizing organic photovoltaics, and eventually we hope to work with electronic manufacturers to integrate our technology into real products", Yang said. "We hope this energy-saving LCD will become a mainstream technology in displays."

"Our coating method is simple, and it can be applied in the future in large-area manufacturing processes," said Rui Zhu, a postdoctoral researcher at UCLA Engineering and the paper's lead author.

"The polarizing organic photovoltaic cell demonstrated by Professor Yang's research group can potentially harvest 75 percent of the wasted photons from LCD backlight and turn them back into electricity," said Youssry Botros, program director for the Intel Labs Academic Research Office, which supported the research. "The strong collaboration between this group at UCLA Engineering and other top groups has led to higher cell efficiencies, increasing the potential for harvesting energy. This approach is interesting in its own right and at the same time synergetic with several other projects we are funding through the Intel Labs Academic Research Office."