ArticlesComputers and Peripherals
Turing Test - Are …

Turing Test - Are You Talking to a Human or a Machine?

Imagine you are allowed to pose five questions to determine whether you are communicating with a person or a machine; what questions would you ask?

The concept of the Turing test was first mooted by the legendary Alan Turing in his 1950 paper Computing Machinery and Intelligence. The idea is that a conversation takes place between a human and a machine using a text-only channel like a computer keyboard and screen.

In the classical form of this test, an evaluator observes the conversation and all three participants are separated from each other. If the evaluator cannot reliably tell the machine from the human, then the machine is said to have passed the Turing test.

The reason I'm waffling on about this here is that my chum Rick Curl recently put me in touch with a guy called Charlie Coultas, who is a volunteer at The National Museum Of Computing, in Bletchley Park, England.

Charlie is currently building a system to allow visitors to perform the Turing test for themselves, and to decide if they are communicating with another human or with a machine. When we first started communicating a couple of weeks ago, Charlie said to me in an email:

We get quite a few schools at the museum and the kids are always happy to get some “hands-on” experience. My Turing Test will drive a 1930s Creed teleprinter and keyboard, much like Turing would have used in the 1940s had he had the computing power to do it. The system -- which is based on a PIC 18F26K22 processor with 64K bytes of on-chip memory from Microchip Technology -- has a series of questions along with “intelligent” answers built in. I hope eventually to add idiomatic context, but initially I’ll see how it goes.

I have built in a random delay of a few hundred milliseconds between characters in the reply phase, which makes the teleprinter really look as though a human is typing.

An external Flash RAM memory stores all the questions that have been asked, so I can download them into my laptop and then reprogram the on-chip Flash memory with the new questions and suitable answers.

Тhere will be a few tempting suggestions that a human might be on the other end; for example, a small UHF aerial will be visible near the teleprinter, thereby giving the idea that there is something “out there” (maybe a human?).

A 1930s bell push will ring a distant bell to get things rolling. I really have no idea how this will all work out, but it should be fun.

Well, earlier today I heard back from Charlie, and it looks as though things are going swimmingly. In today's communication, Charlie said:

Hi Max, the Turing test machine works, and works well. Even though it has only a few hundred question/answer pairs it is fairly convincing. It isn’t live at Bletchley Park yet, but we are working on it. Here's a photo of one of the short tests: 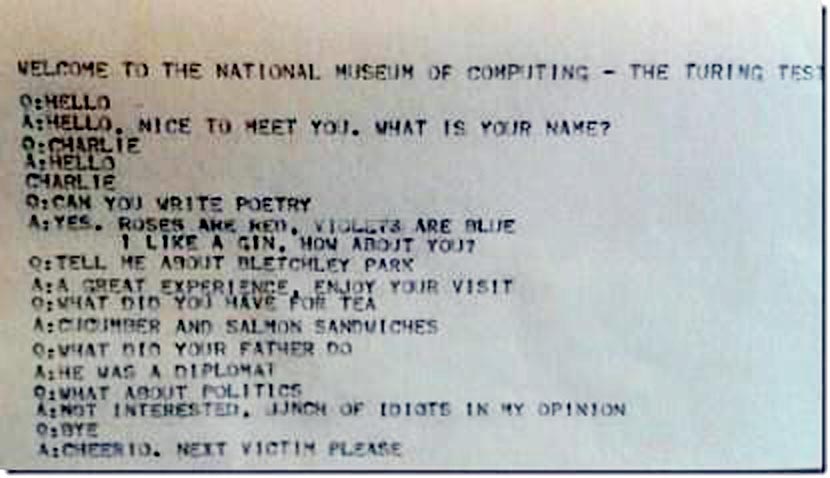 Charlie went on to say that he is looking for help with regards to the sort of questions people might ask so that he can prepare his answers ahead of time.

So, imagine that you are sat in front of Charlie's 1930s teleprinter. You are allowed to pose five questions to determine whether you are communicating with a person or a machine (only text characters, not numbers). What five questions would you ask?