CircuitsComputers and Peripherals Domestic
Build Yourself a Fan …

Build Yourself a Fan Temperature Control

CPU coolers have been getting more and more efficient over the last years. However, this higher performance usually has a price: More noise. Noise is annoing and reduces well-being and productivity - so why not do something against it?

Instead of continueing to whine about current solutions, we present a better one. For about $4, you can build yourself a temperature control with the following features:

With all these features, you might think that this temperature control will be hard to build and requires lots of expensive parts. Wrong guess. It consists of just three electronic parts!

All of these are standard, easy-to-get parts.

The MOSFET can be just about any N-channel Power MOSFET, as long as it can handle the 12 V voltage and the amperes the fan requires. Even the cheapest Power MOSFETs in the $1 area can usally handle over 50 V and over 10 amperes, so they will be by far sufficient for this circuit. We used an IRFZ24N MOSFET. If you're in the US, you can use an IFR510 Power MOSFET. The pinout of Power MOSFETs is standardized, as you can see on the image. It is very unlikely that the MOSFET you buy has a different pinout, unless you get a really exotic one.

The spindle trimming potentiometer should be a 10K type. If you cannot get a 10 K unit, 20 K or 25 K will also do. However, this pot is rather large and bulky, a spindle trimming potentiometer is really the more elegant (and also cheaper) solution. Finally, for the NTC thermistor, get the cheapest 10K NTC you can get. It doesn't matter if it has a high tolerance. You can also use the flat thermistors for CPU monitoring that ship with some motherboards.

Apart from the electronic parts, you should also get:

Assembling it
I won't be bothering you with complicated electronic symbols - instead, I've drawn all the components the way they really look, to make it as easy as possible for you. This way, you can build the circuit without any knowledge about electronics - as long as you know how to use a soldering iron. Note that the NTC is shown larger than it is in real life.

When it's done in an elegant way, the entire circuit can be as small as you can see on these photos:

However, if you're not very experienced with soldering, I'd recommend to build the thing on a larger PCB. Before you start testing your device, read the following warning:

WARNING! Whenever you're building an electric or electronic device, good insulation is very important for security. This temperature control isn't an exception. All parts of the temperature control, including the sensor and the MOSFET transistor (even it's metal backplate!) carry a voltage of up to 12 V. Therefore, it is absolutely required that the circuit is properly insulated (e.g. using heat-contractable tubing or electrical tape). If the unit is not properly insulated, a short circuit will occur if the circuit or the sensor touches the case or (even worse) the motherboard.

Fan RPM monitoring will NOT work with this temperature control. Don't try to connect the rpm signal wire to your motherboard. It will not work and might damage your motherboard. Building a temperature control that works with rpm monitoring would require the usage of a P-Channel MOSFET (and a different circuitry), which are not as widely available as N-Channel Power MOSFETs. 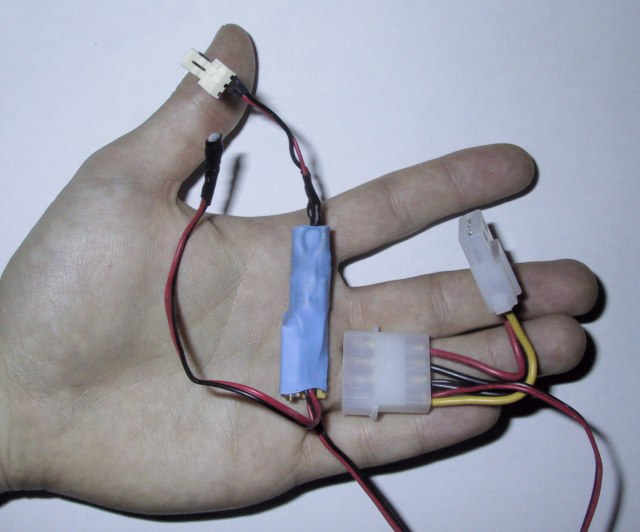 Here's the finished unit with proper insulation. The potentiometer's screw sticks out on the lower end.

Setting up the temperature control

Exact adjustment is crucial if you'd like your temperature control to work the way it should. Do invest enough time adjusting it precisely. If the adjustment is not good, the computer will either overheat, or the fans will spin almost at top speed all the time, making the control useless.

You might notice that when turning your computer on, the controlled fans will not spin at all. After a while, as the system gets hotter, they will start to spin; and often they will spin a little faster at first, but then fall back to slower speed after a while. This is normal; the reason is that fans need a higher voltage to start spinning than to keep spinning.

If you build this temperature control, you do it at your OWN RISK. The instructions presented here come with NO WARRANTY, neither expressed nor implied.