Vishay introduced the industry’s first p-channel power MOSFET in the industry’s smallest 0.8 mm by 0.8 mm chipscale package, in addition to the first n- and p-channel devices to offer on-resistance ratings down to 1.2 V in this package size. The 8 V n-channel Si8802DB and p-channel Si8805EDB TrenchFET® power MOSFETs in the MICRO FOOT® package occupy up to 36 % less board space than the next smallest chipscale devices, yet offer comparable − and even lower − on resistance. 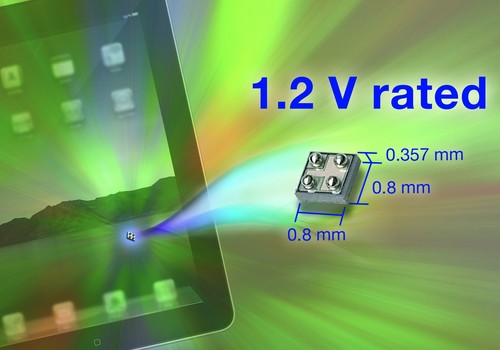 The devices released today feature low on-resistance at 1.5 V with the added benefit of on-resistance specified with a gate drive of only 1.2 V. This simplifies designs by allowing the MOSFETs to work with the low-voltage power rails common in handheld devices, eliminating an extra resistor and voltage source for p-channel load switching, and providing longer battery operation between charges in n-channel load switching.

Samples and production quantities of the new Si8802DB and Si8805EDB TrenchFET power MOSFET are available now, with lead times of 12 to 14 weeks for larger orders.