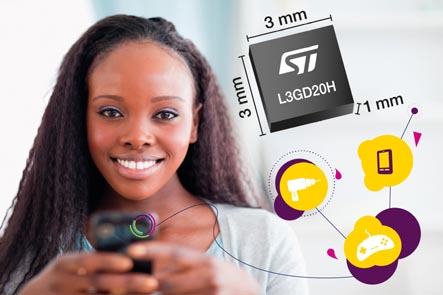 The ultra-small dimensions of this gyroscope also allow experimental projects such as wearable electronics to move closer towards true practicality. One such application is the prototype smart suit that ST used to demonstrate inertial body-motion reconstruction early in 2012, which can help enhance various applications such as augmented reality, sports training aids, or medical therapy.

ST’s MEMS gyroscopes, as well as the accelerometers, magnetometers and iNEMO™ inertial modules, enable innovative products and apps such as context-sensitive user interfaces, augmented reality, kinetic gaming, and industrial solutions including container tracking or emergency-stop mechanisms. In February 2012, IHS iSuppli predicted the total market for MEMS devices enabling such applications will more than double to $4.25 billion by 2015. In particular, 3-axis gyroscopes – such as the L3GD20H – will represent over $900 million of this market.

In addition to enabling advanced product miniaturization, ST’s L3GD20H also helps conserve battery power by drawing 25% lower current than the previous generation of devices. The L3GD20H is also ready for action in only one-fifth of the time after turn on, enabling the end-user application to deliver a better overall experience. Finally, the gyroscope’s output has 60% lower noise, which can help to simplify hardware and software design and speed up communication with the host system leading to faster application performance.

The L3GD20H, housed in the LGA-16 leadless surface-mount package, is scheduled to begin sampling in Q3 2012 and to enter mass production in Q4 2012 priced at $2.60 in quantities of 1,000 units. Alternative pricing options for higher quantities are available on request.