LED lights for critical applications such as vehicle lights, streetlamps and emergency lights are even more dependable and long-lasting thanks to a new fault-management chip from STMicroelectronics.

The new chip, the LBP01, is used in lamps that comprise multiple channels each containing several LEDs. Without the LBP01, failure of a single LED can extinguish an entire channel, significantly reducing total light output and demanding early replacement. The LBP01 bypasses failed LEDs so that the lamp can continue producing near-maximum illumination. This improves performance and safety, and can yield valuable savings for operators such as city authorities, as the total cost of replacing a streetlamp can be as much as $700. 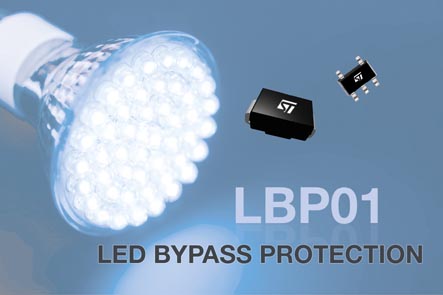 The LBP01 delivers some important advantages over comparable devices in the market. By offering the flexibility to use one bypass for every two LEDs, it enables designers to reduce bill-of-materials costs, as competing devices typically can only bypass one LED each. It also provides built-in surge protection to help prevent LED failures occurring.

Markets for safety-oriented LED signage and lighting, including automotive lighting and streetlighting, are predicted to exceed $5 billion by 2015. The LBP01 can also be used to enhance LED-backlight longevity in LCD panels for a wide variety of applications. To maximize design-in opportunities, ST is offering the LBP01 in two package options giving designers the choice of a 3.95 × 5.6 mm SMB package to replace competing devices directly or a 3 × 3.05 mm SOT23-5 package enabling a more compact solution.

The LBP01 is in production now, priced from $0.19 in the SOT23-5 package or $0.21 in the SMB package, for orders over 1,000 pieces. Alternative pricing options for higher quantities are available on request.