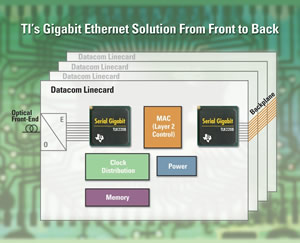 TI's new TLK2208 eight-port Gigabit Ethernet transceiver is based on a 0.18-micron CMOS manufacturing process that lowers power consumption to a maximum of 162 milliwatts (mW) per channel at 1.25-gigbits per second (Gbps). By comparison, single-channel devices operating at this speed typically consume 200 mW and require more than three times the space for the same number of channels. As the lowest-power octal device available, the TLK2208 not only saves power in operation, but also creates less heat than competing solutions, permitting a greater concentration of channels in the same board space.

Flexibility, Space Savings and Ease of Use

The eight full-duplex channels of the TLK2208, compliant with the IEEE 802.3z Gigabit Ethernet specification, are synchronizable at speeds from 1.0 to 1.3 Gbps. The channels can be used with independent timing in either of two selectable parallel interface modes. Based on reduced-pin double data rate (DDR) timing, the dual-mode feature offers greater flexibility and ease of use for system designers such as the ability to interface to existing ASICs and FPGAs. Also, the deviceґs timing mechanism provides compatibility with both source-synchronous and source-centered ASICs.

The TLK2208 is a drop-in replacement for comparable octal devices, simplifying layouts and allowing manufacturers to progress to a more efficient transceiver solution without significant hardware redesign.

TIґs TLK2208 eight-port Gigabit Ethernet transceiver and evaluation modules (EVMs) are available now. The TLK2208 transceiver is packaged in a 289-pin ball grid array (BGA) with a 19x19-mm footprint and a 1-mm ball pitch. Planned pricing is $30 per unit in quantities of 1,000 units.