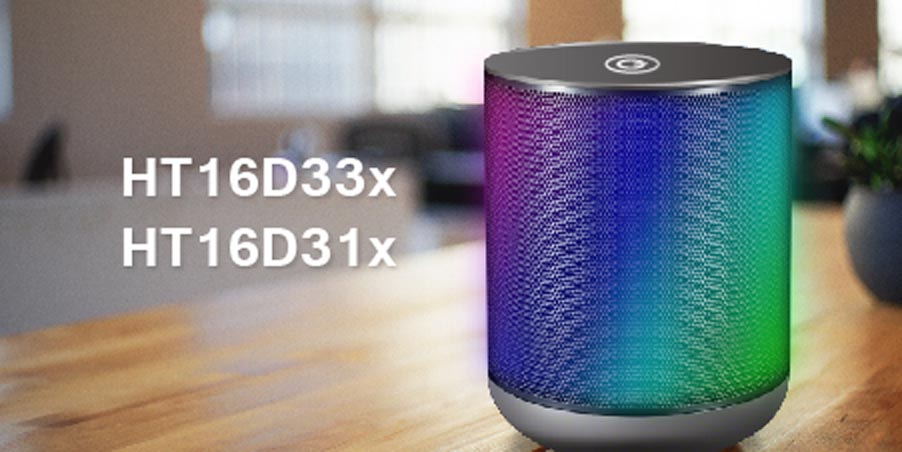 All devices include a serial interface. The HT16D31A and HT16D33A utilise a 3-wire SPI interface type while the HT16D31B and HT16D33B utilize a newly designed I2C interface type, which only requires one address line and can connect up to 4 ICs. The HT16D33x supports three display modes which are 16×16 pixels, 12×12 pixels and (9×10 + 9×10) pixels while the HT16D31x can display 8×9 pixels. These devices include fully integrated LED short circuit detection and over temperature protection circuits to avoid product function failure or burn-out problems. Each output channel has a 16-level current setup selection which supports a maximum constant current output of up to 45 mA. The overall brightness scale has a 256-level adjustment and each output has a 256-level illumination scale using PWM circuitry allowing it to generate up to 16 million colours when the RGB is in full color. Each output can also be setup to have blinking or fading lighting effects, which can produce firefly or glass lamp effects.

These devices all include a fully integrated Page Frame Data Memory where the single-colour mode has a maximum of 16 frames for rapid animation displays. The automatic scroll function also exists to assist users to design animation effects. In addition, these devices also come in small QFN package types making them suitable for use in low profile small product applications, the HT16D33x are also provided in 28-pin SSOP package types.

Holtek's colour LED drivers series include the already volume produced HT16D35x, offering additional choices when added to these new HT16D33x and HT16D31x device series. In order to assist users to rapidly develop their applications, Holtek also provides a graphics editing software tool. Developers can use this user friendly tool to setup and edit patterns and colors, set rolling functions, setup fade and other functions and then view the simulated display on their computer screen. An EV Board and LED workshop development system are also provided to convert any user-edited graphics and instructions into MCU application code, ready for progra mming into the Holtek MCU.