Fujitsu Semiconductor announced the release of the 8 Mbit ReRAM MB85AS8MT, which has the world's largest density as a mass-produced ReRAM product, available from September 2019. This ReRAM product was jointly developed with Panasonic Semiconductor Solutions Co.. 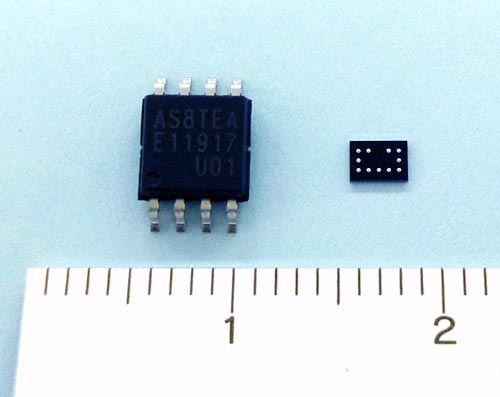 The MB85AS8MT is an EEPROM-compatible non-volatile memory with SPI-interface that operates with a wide range of power supply voltages from 1.6 V to 3.6 V. One major feature of this memory is an extremely small average current for read operations of 0.15 mA at an operating frequency of 5 MHz. This enables minimal battery consumption when mounted in battery-operated applications with frequent data-read operations.

Since it can be provided in a very small WL-CSP (Wafer Level Chip Size Package), it is optimal for battery-operated small wearable devices such as hearing aids, smart watches, and smart band.

In order to meet such needs, this new non-volatile ReRAM memory has been developed with the two features of "large density enabling byte-access" and "small read current." This time, our company has newly developed the MB85AS8MT, featuring world-class largest density in the ReRAM family at 8 Mbit. Its electric specifications, such as commands and timings, are compatible with EEPROM products.

Therefore, mounted in battery-operated applications with frequent data-read operations, such as specific program reading or setting data reading, it enables minimal battery consumption due to its very small read current.

The package is an EEPROM-compatible 8-pin small outline package (SOP). In addition, a very small 11-pin WL-CSP package of 2 mm × 3 mm is available for mounting in small wearable devices.