Cree has announced the CV94D-FCC LED that integrates three emitters in a compact surface-mount device (SMD) package. The package includes tightly packed red, green, and blue (RGB) emitters enabling full-color signs or displays based on solid-state lighting (SSL) technology. Cree identified the target application as intelligent transportation systems, with a primary example being dynamically changeable signs that are increasingly being suspended above freeways. 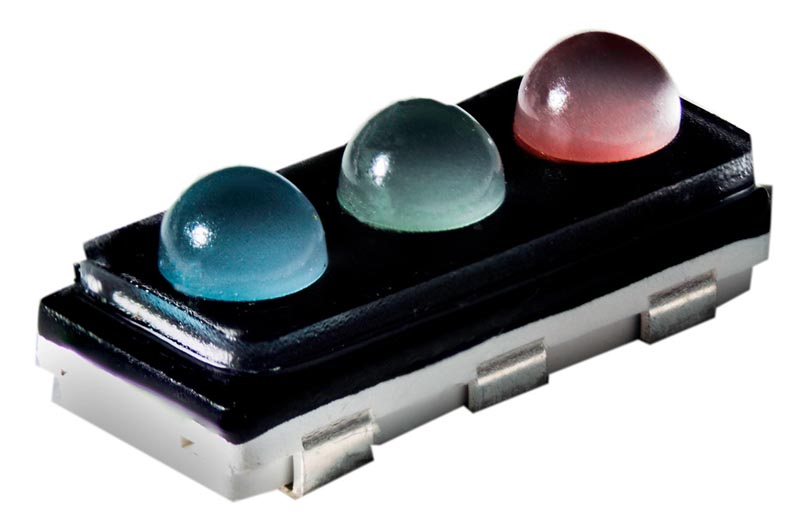 We have written quite a lot of late about LED-based, directly- or self-emissive color displays. Self-emissive means the LEDs deliver the video images as opposed to, say, being used for backlights in a liquid-crystal display (LCD). The technology has long been used in applications such as sports stadium video boards and façades at locations such as Times Square in New York. Finer pixel pitch is even bringing the technology indoors.

In the transportation segment, meanwhile, dynamic signs allow cities and states to deliver important information to drivers. In the US, for example, the signs broadcast what are called Amber Alerts when a child is abducted. They also notify drivers of road closures and lately have been used to display coronavirus reminders.

Most of the freeway signage has been based on amber monochromatic technology. But signs that are either full color, or even that just have a portion of the display capable of color, can do a better job of grabbing attention and expressing a message.

The requirements for such transportation-oriented signage and facade displays share many of the same requirements from RGB LEDs and yet need difference characteristics in some aspects. For example, the tightly packed and aligned LEDs, with each package forming a pixel, ensure good far-field performance in terms of uniformity and precision. In other words, the display looks sharp from afar. Many transportation displays have used discrete, through-hole LEDs in the past and it is far harder to manufacture a precise display with such technology. The integrated RGB emitters also result in better color mixing.

Where transportation display requirements differ considerably from, say, facade displays is in viewing angle. A display board on a building or in a sports stadium needs a very broad viewing angle so as many people as possible can see the images. The freeway sign needs the brightness of the LEDs focused much more narrowly so that drivers can see the sign message from as far away as possible. Cree said the CV94D is the brightest LED on the market with a 30° beam pattern.

The color, beam, and uniformity combine with the ease of manufacturing as benefits for manufacturers of signs. SMD LEDs are assembled on automated printed-circuit board (PCB) assembly lines. And precision is a given.