Microchip Technology Inc., a leading provider of microcontroller, analog and Flash-IP solutions, today announced the expansion of its stand-alone real-time clock/calendars (RTCCs). Building upon the success of the MCP794XX family of products, Microchip is introducing the MCP7940N, which offers battery switchover and timestamp for accurate timekeeping, digital trimming for time-of-day calibration and 64 bytes of SRAM. Starting at $0.57 each in 10,000-unit quantities, it offers a lower-cost alternative to the existing MCP7941X devices, which feature 1Kbit of EEPROM memory and a 64-bit reprogrammable unique ID. 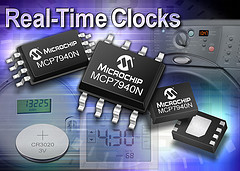 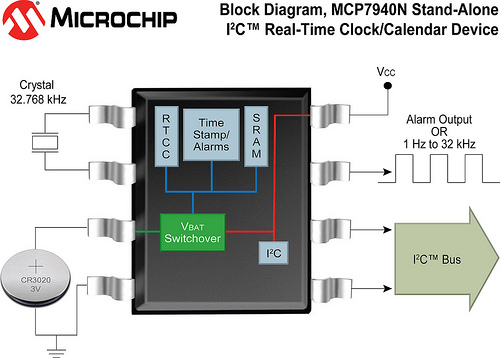 Many applications, such as cameras and notebook PCs, require a real-time clock with back-up power to maintain time and alarm settings when the main power is turned off. Other applications, such as commercial refrigeration, point-of-sale equipment and security systems, need a real-time clock with a power-fail monitor to capture and store the timeframes when main power fails. With its on-chip battery-switchover circuit and power-fail timestamp, the MCP7940N RTCC delivers this functionality, helping to address system health, safety and security concerns in applications involving the storage of perishable goods, or the monitoring of access to secure rooms. The digital-trimming feature can support software temperature compensation, which lowers costs in comparison to devices where temperature compensation takes place in hardware. The device’s 64 bytes of SRAM can temporarily store information, which further reduces overall system cost.