Printed circuit boards have many applications in different sectors ranging from commercial gadgets and devices to medical equipment, military and aerospace. Finding PCBs is an effortless task because there are several manufacturers and retailers. However, these boards are designed for a variety of applications. For instance, a rigid-flex PCB is well suited for medical, military and aerospace applications that involve large amounts of vibration and shock. Heavy-duty copper PCBs, on the other hand, have unique applications where the typical rigid or flex boards are insufficient. Since there are several types of printed circuit boards, it is essential to choose designs that suit your PCB needs. Here is an overview of the main applications of heavy copper PCBs.

What is heavy copper PCB?

There is no set definition for heavy copper PCB according to per IPC, which is connected to the electronics industry. The general description for this type of PCB is one that is fabricated using 4 ounces of copper or more in each layer of the PCB. The conventional PCB uses epoxy-based substrates such as polyimide and fiberglass, which have a lower current capacity and moderate heat distribution. If your circuit needs to enhanced heat elimination, heavy copper PCBs are the ideal option. They can also be used in both double-sided and multilayer circuit boards. Nevertheless, these boards are usable in a myriad of applications, especially those that require high-power distribution heat dissipation, power converters and planar transformers. 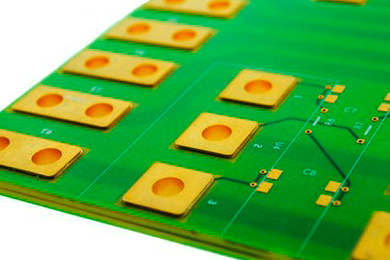 Where is heavy copper PCB used?

There are several uses of heavy copper printed circuit boards. It has become an ideal choice in new industries such as electric vehicles (EV), photovoltaics (PV) and battery management systems (BMS). Some industries use heavy copper PCBs in isolation, while others combine them with rigid and flex PCBs. Because of the built-in base metal core, these boards are generally used for very specific customer needs. This includes welding equipment, automotive industries in EVs, and other autos PCBs, solar panel manufacturing, power electrical supply and distribution as well as power converters. However, heavy copper PCB applications can be summarized into two main categories as follows:

These boards aid the dispersion of heat, especially in applications that result in augmented core temperature. The use of heavy core PCBs keeps the device safe from the adverse effects and damages of heat. The metal core is able to transfer most of the heat built in the component at a much faster rate. As such, it is the ideal choice where heat dissipation is among the top concerns. Heavy copper PCBs are also high-frequency boards that are limited to devices that cannot be cooled sufficiently using fan-cooling or other traditional techniques. The board design is optimized to laminate, scatter and dissipate the heat as it makes the device cooler. Eliminating the heat also improves both the board's and the device's performance.

Heavy copper PCBs are made using a unique mixture featuring various distinct allows. These circuit boards are estimated to be at least eight times faster than other contemporary options. Most commercially-available printed circuit boards are manufactured for low-voltage and low-power applications. Heavy copper PCBs and PCBAs are driven to achieve maximum value and performance. As such, they are increasingly becoming complex and able to sustain higher power currents and densities. Because of the increased current density, these boards are very efficient and provide significantly high speeds. Enhanced heat management and device protection also allow the board and unit to function more efficiently. This makes heavy copper PCBs perfect for protecting LED device performance. In fact, it is recommendable to use high-density heavy-copper PCBs for LED devices.

Heavy copper PCBs are primarily built to eliminate heat and prevent circuit damages caused by excessive heat. They also feature higher current densities so they can distribute more power and suit high-current applications. Heavy copper PCBs are prevalent in the military and aerospace industries but are also gaining traction as a viable alternative in commercial, industrial production. They suit designers that are looking to increase value and performance in their construction. What's more, these designs reduce the need for duplicate layers, thus reducing the overall energy losses.

The advantages of choosing dense copper circuitry are quite obvious and straightforward. These PCBs have better thermal strain endurance and also have augmented current carrying capacity. They increased the mechanical strength, especially at the connector sites and in the PTH holes. Also, if you find reputable manufacturers that use exotic materials, your PCBs will achieve their full potential and operate in high-temperature environments without circuit failure. Other benefits of heavy copper PCBs include:

The benefits of heavy copper circuit construction range from potential cost saving to low impedance power distribution, reduced layer count and smaller footprint, among others. Heavy copper features also allow seamless connection to standard circuits. Nonetheless, there are many differences, so you can find heavy copper PCBs that feature anything from 3-0z for single units to 20-oz copper or more for multilayer PCB. Make sure the manufacturer is certified for the copper densities they use. It is also essential to choose credible, reputable manufacturers that can guarantee premium quality heavy copper PCBs. As special PCB units, heavy copper designs suit unique needs, so you should always start by outlining your requirements to determine the best heavy copper construction for the project.