ANN ARBOR, Mich.— A 9-cubic millimeter solar-powered sensor system developed at the University of Michigan is the smallest that can harvest energy from its surroundings to operate nearly perpetually.

A low-power, sensor system developed at the University of Michigan 1,000 times smaller than comparable commercial counterparts. It could enable new biomedical implants. 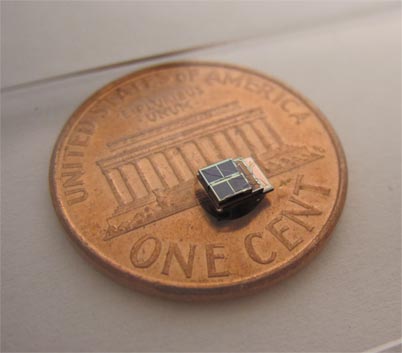 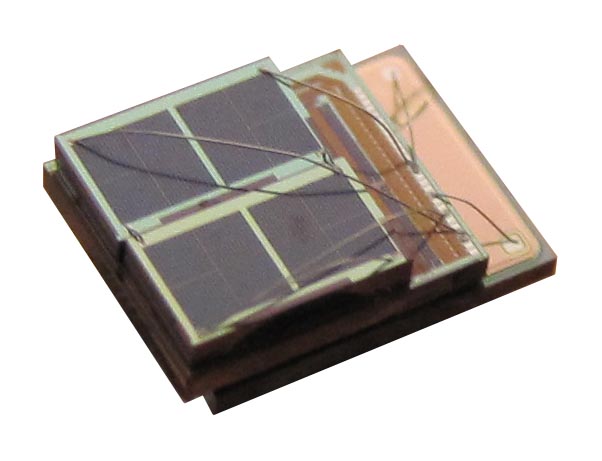 The U-M system’s processor, solar cells, and battery are all contained in its tiny frame, which measures 2.5 by 3.5 by 1 millimeters. It is 1,000 times smaller than comparable commercial counterparts.

The system could enable new biomedical implants as well as home-, building- and bridge-monitoring devices. It could vastly improve the efficiency and cost of current environmental sensor networks designed to detect movement or track air and water quality.

With an industry-standard ARM Cortex-M3 processor, the system contains the lowest-powered commercial-class microcontroller. It uses about 2,000 times less power in sleep mode than its most energy-efficient counterpart on the market today.

The engineers say successful use of an ARM processor— the industry’s most popular 32-bit processor architecture—is an important step toward commercial adoption of this technology.

Greg Chen, a computer science and engineering doctoral student, will present the research Feb. 9 at the International Solid-State Circuits Conference in San Francisco.

“Our system can run nearly perpetually if periodically exposed to reasonable lighting conditions, even indoors,” said David Blaauw, an electrical and computer engineering professor. “Its only limiting factor is battery wear-out, but the battery would last many years.”

“The ARM Cortex-M3 processor has been widely adopted throughout the microcontroller industry for its low-power, energy efficient features such as deep sleep mode and Wake-Up Interrupt Controller, which enables the core to be placed in ultra-low leakage mode, returning to fully active mode almost instantaneously,” said Eric Schorn, vice president, marketing, processor division, ARM. “This implementation of the processor exploits all of those features to the maximum to achieve an ultra-low-power operation.”

The sensor spends most of its time in sleep mode, waking briefly every few minutes to take measurements. Its total average power consumption is less than 1 nanowatt. A nanowatt is one-billionth of a watt.

The developers say the key innovation is their method for managing power. The processor only needs about half of a volt to operate, but its low-voltage, thin-film Cymbet battery puts out close to 4 volts. The voltage, which is essentially the pressure of the electric current, must be reduced for the system to function most efficiently.

“If we used traditional methods, the voltage conversion process would have consumed many times more power than the processor itself uses,” said Dennis Sylvester, an associate professor in electrical and computer engineering.

One way the U-M engineers made the voltage conversion more efficient is by slowing the power management unit’s clock when the processor’s load is light.

“We skip beats if we determine the voltage is sufficiently stable,” Sylvester said.

The designers are working with doctors on potential medical applications. The system could enable less-invasive ways to monitor pressure changes in the eyes, brain, and in tumors in patients with glaucoma, head trauma, or cancer. In the body, the sensor could conceivably harvest energy from movement or heat, rather than light, the engineers say.
The inventors are working to commercialize the technology through a company led by Scott Hanson, a research fellow in the Department of Electrical Engineering and Computer Science.

This research is funded by the National Science Foundation, the Defense Advanced Research Projects Agency, the National Institute of Standards and Technology, the Focus Center Research Program and ARM.