Fujitsu Semiconductor developed of a new FRAM product, the MB85RC1MT, with 1 Mbit of memory, the highest memory density of our products with an I2C serial interface.

The new product is guaranteed for up to 10 trillion read/write cycles, and is optimum for use in applications requiring frequent rewriting of the data, such as real-time data logging for factory-automation, metering, and industrial equipment. Now with the broad range of lineup for both the I2C and SPI serial interface products, Fujitsu Semiconductor can offer its customers non-volatile memory products that best fit their requirements. 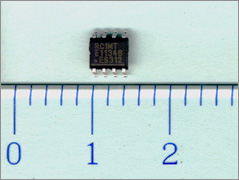 FRAM is a type of memory that features both non-volatility, which allows data to be retained even when the power is switched off, and random access, which enables fast data writing. Especially noteworthy among non-volatile memory technologies, it guarantees maximum 10 trillion read/write cycles. Since Fujitsu Semiconductor began mass production of FRAM products in 1999, these features of FRAM have led to their wide use in such applications as factory-automation equipment, instrumentation, financial terminals, and medical devices.

Fujitsu Semiconductor recently developed a new addition to its FRAM lineup, the MB85RC1MT, with 1 Mbit of memory (128 K word × 8 bit), the highest memory density of the company's products with the I2C serial interface.

The product operates at the voltage between 1.8 and 3.3 V in the temperature range between -40 and 85 C. As to operation frequency, the product supports "high-speed" mode, which enables read and write at 3.4 MHz, as well as 1MHz operation, the same speed as conventional EEPROMs. It guarantees 10 trillion rewritings, which well exceeds conventional EEPROMs, and supports the frequent rewriting of the data, such as real-time data logging for I2C interface products, as well as ones with other interfaces. Furthermore, applications that have used other products with I2C interfaces, such as EEPROMs and microcontrollers, can now replace EEPROMs, with the new FRAM products, enabling high-precision data capture through high-frequency logging (Figure 1) and reducing the power consumption during the data writing (Figure 2).

The addition of the MB85RC1MT extends the line of FRAM products with the I2C interface to cover the range from 4 Kbit to 1Mbit, and those with the SPI interface from 16Kbit to 2Mbit (FRAM Product Lineup). These FRAM products are offered in industry-standard 8-pin SOP packages, so they can replace EEPROMs or serial Flash memories, used in applications such as factory-automation, metering, and industrial equipment, without the major change in the PCB design.

Fujitsu Semiconductor will continue to develop FRAM products which meet its customers' requirements, including low-power products which are increasingly demanded for applications such as energy harvesting, where low voltage operation is essential.