NXP Semiconductors announced the availability of a new and highly optimized reference design for 5 volt low power Qi wireless charging transmitters, compliant with the Wireless Power Consortium (WPC) 1.1 Qi specification. The design is based on NXPs single-chip 5 V wireless power transmitter IC, the NXQ1TXA5 that was launched in 2014. It is the latest addition to NXP’s portfolio of Greenchip power solutions, known for their world class performance for power efficient applications. 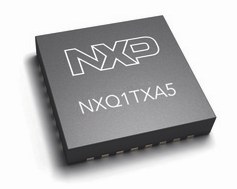 Due to the low power consumption of the NXQ1TXA5 device itself, the reference design also has a high efficiency for low transmitted powers, making it suitable for applications ranging from smartphone charging to deliver 5 W to the smartphone battery when used with a Qi compliant wireless charging receiver, to chargers for wearables that need less than 2 W charging power.

The NXQ1TXA5 reference design needs only 15 to 20 low cost passive components and uses a standard 2-layer PCB, with the components mounted on a single side. Depending on customer requirements, the complete application can be designed on a board space as small as 3×3 or 4×4 cm.