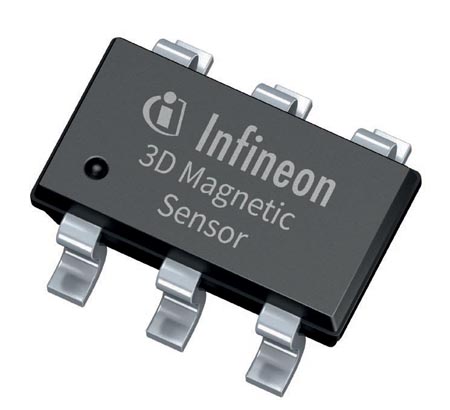 The TLV493D-A1B6 suits consumer and industrial applications that require accurate three-dimensional measurements or angular measurements or low power consumption, such as joysticks; control elements used for white goods and multi-function knobs; and electric meters where the 3D magnetic sensor helps to protect against tampering. With its contactless position sensing and high temperature stability of magnetic threshold, the TLV493D-A1B6 enables these systems to become smaller, more accurate and robust.

“Our TLV493D-A1B6 enables magnetic sensing to applications which have not been considered so far by making them smaller, more accurate and robust,” said Ralf Bornefeld, Vice President and General Manager, Sense & Control, Infineon Technologies AG. “Our TLV493D-A1B6 marks the starting point for a new 3D magnetic sensor family. Later this year, we will offer a 3D sensor for automotive applications such as gear sticks and steering column controls.” 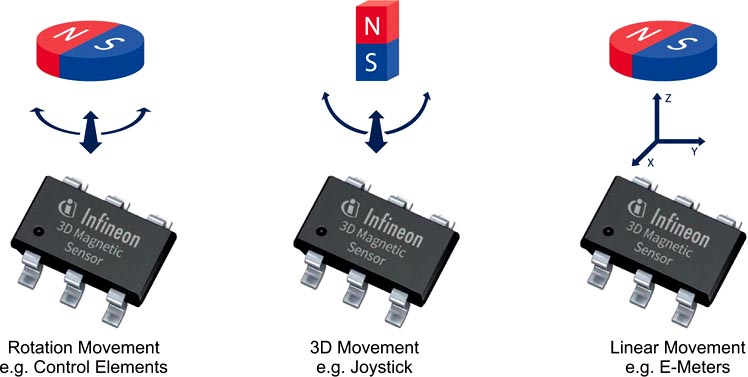 The TLV493D-A1B6 provides 12-bit data resolution for each measurement direction. This allows a high data resolution of 0.098 mT per bit (LSB) so that even the smallest magnet movements can be measured.

One of the main development goals for the TLV493D-A1B6 sensor was low power consumption. In “Power Down mode,” the sensor only requires 7 nano Ampere supply current. To perform magnetic measurements, the sensor can be set in one of five different power modes. In “Ultra Low Power Mode,” for example, the sensor performs a magnetic measurement every 100 milliseconds (10 Hz) resulting in a current consumption of 10 µAmpere. The time between measurement cycles can be set flexibly allowing system specific solutions. Using the sensor with continuous measurements, the maximum power consumption is only 3.7 mAmpere. Also, the power modes can be changed during operation.

The TLV493D-A1B6 uses a standard I2C digital protocol to communicate with external microcontrollers. It is possible to operate the sensors in a bus mode to eliminate additional wiring cost and efforts.

Targeting industrial and consumer applications, TLV493D-A1B6 can be operated on supply voltages between 2.7 Volt and 3.5 Volt and in a temperature range between –40°C to 125°C. The product is qualified according to industry norm JESD47.

To enable a fast design-in process, Infineon offers the evaluation board “3D Magnetic 2Go.” In combination with the free 3D sensor software, first magnetic measurements are attainable within minutes. The evaluation board applies the Infineon 32-bit microcontroller XMC1100 that uses the ARM® Cortex®-M0 processor.

Engineering samples of the TLV493D-A1B6 designed for consumer and industrial applicationsare available as of July 2015. Volume production is expected to start in January 2016. To serve customers in the automotive market, Infineon will conduct a full AEC-Q100 qualification on the sensor. Volume production for the automotive qualified TLE493D-A1B6 is expected for mid of 2016.