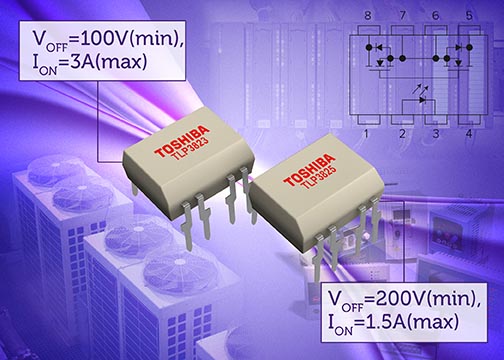 The new products will extend the range of high-current photorelays to replace mechanical relays, alongside Toshiba’s existing 60 V, 5 A TLP3547. Toshiba is supporting and promoting the accelerated replacement of mechanical relays by applying its latest trench MOSFET structure, 8th generation UMOS, to realize output currents exceeding 1 A.

Unlike mechanical relays, photorelays have no physical contacts that incur wear and tear, thus contributing to significantly increased reliability. Photorelays are much smaller, thereby supporting the development of smaller and thinner products.

The new photorelays will be used in diverse applications including industrial equipment, inverters, HVAC equipment, building automation and semiconductor and other test equipment. In almost all cases they will be replacing mechanical relays.

Both devices offer an isolation voltage of 2500 Vrms and low values of on-resistance (TLP3823 60 mΩ typ., TLP3825 250 mΩ typ.) to ensure efficient operation. The rapid turn-on and turn-off times allow the photorelays to be used in fast switching applications. The required triggering current is below 5mA for both devices and, when off, the devices have a leakage current of less than 1 μA.

Mass production shipments of both the TLP3823 and TLP3825 has begun.

The latest Gartner market report recognizes Toshiba as the leading manufacturer of optocouplers by sales in 2015 and 2016, with a 23% by sale-based market share in CY2016. (Source: Gartner “Market Share Semiconductor Devices and Applications Worldwide 2016”, 30 March 2016).