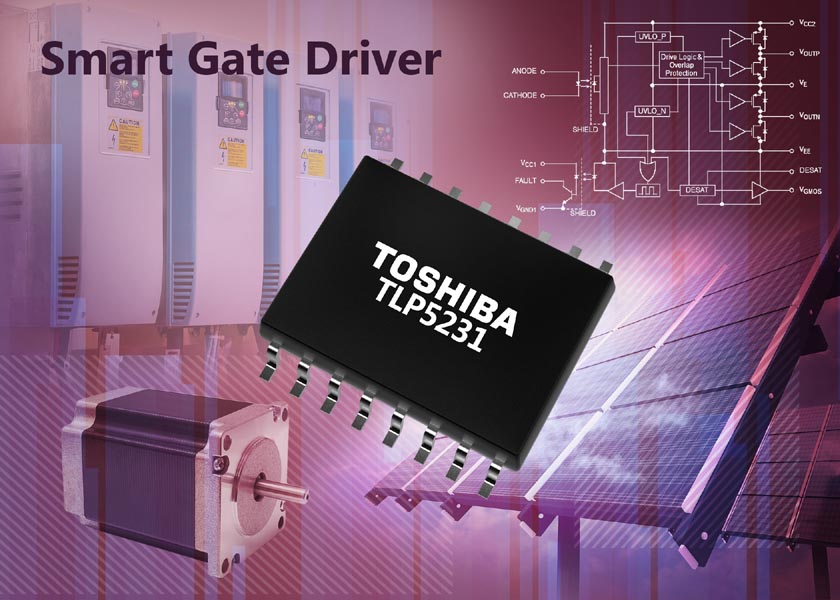 The TLP5231 pre-driver has a pair of outputs that are designed to drive external p-channel and n-channel MOSFETs used for current buffers. This allows the usage of a wide range of MOSFETs with various current ratings, meaning that the IGBT can be controlled by a rail to rail gate voltage. The driver can source and sink peak currents up to 2.5 A and is rated for 1.0 A continuously.

The device incorporates overcurrent detection, implemented by sensing VCE(sat) as well as undervoltage lock out (UVLO), both of which provide an open collector fault signal to the primary side. These features are not available on existing products (such as the TLP5214 & TLP5214A) and their inclusion on the TLP5231 significantly eases the process of gate drive circuit design.

Additionally, the “gate voltage soft turn off time” after VCE(sat) overcurrent detection can be controlled by another external n-channel MOSFET. Propagation delays (L/H & H/L) are as low as 100 ns.

Despite being housed in a tiny SO16L surface mount package, the TLP5231 offers an isolation voltage (BVs) of 5000 Vrms (min.) with an internal isolation thickness in excess of 0.4 mm. Creepage and clearance distances are at least 8.0 mm, making it suitable for safety-critical applications.