Toshiba Electronics Europe has launched two new gate driver switch intelligent power devices (IPDs). Fully AEC-Q100 compliant, the TPD7106F and TPD7107F can be used to control the conduction and shut-off of currents being supplied to automotive electronic control units (ECUs), including junction boxes and body control modules. They are also suited to use in power distribution modules and semiconductor relays. 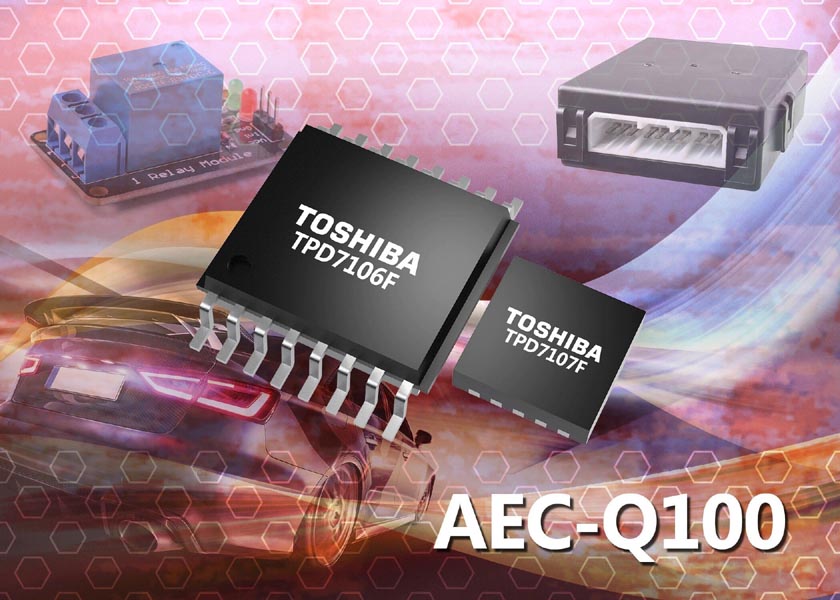 When combined with Toshiba’s low on-resistance N-channel automotive MOSFETs, such as the TPHR7904PB (40 V/ 150 A) or TPH1R104PB (40 V/ 120 A), the TPD7106F and TPD7107F IPDs can serve as high-side switches to control load current. These new solid-state devices are able to replace mechanical relays, thereby reducing the size and power consumption of automotive ECUs. As they have no moving parts, they are free from the contact wear issues associated with mechanical relays, thereby helping to significantly reduce maintenance costs.

The TPD7106F and TPD7107F have an array of enhanced functions that support the high reliability required by automotive ECUs. These include a self-protection function and various built-in diagnostic features (voltage abnormalities, over-current, over-temperature, reversed power connections, floating ground pin and short to VDD) that are output to the microcontroller. As a result, the new IPDs can monitor load operation as well as the MOSFET to which they are connected. Should abnormal operation occur, they can rapidly turn off the MOSFET to reduce the load current flowing through it – without the need for microcontroller intervention.

The new IPDs substantially reduce bill-of-materials (BoM) costs and component count as they each have a built-in voltage boosting circuit. Efficient operation is assured with a supply current as low as 5 μA (max) for the TPD7106F and 3 μA (max.) for the TPD7107F when in stand-by mode. The TPD7106F is supplied in a compact 16-pin SSOP package, while the TPD7107F is housed in a WSON10A package. Both operate over wide temperature ranges, with the TPD7107F supporting –40 °C to +125 °C and the TPD7106F covering –40 °C to +150 °C.