Sharp Corp. recently unveiled two versions of a new robotic vacuum cleaner named Cocorobo (a play of words that combines “heart” and “robot” in Japanese). While they are expected to be more expensive than iRobot’s popular vacuuming robot Roomba, the Cocorobo vacuuming robots do come with additional features that might become popular and adopted by other vacuuming robot manufacturers. 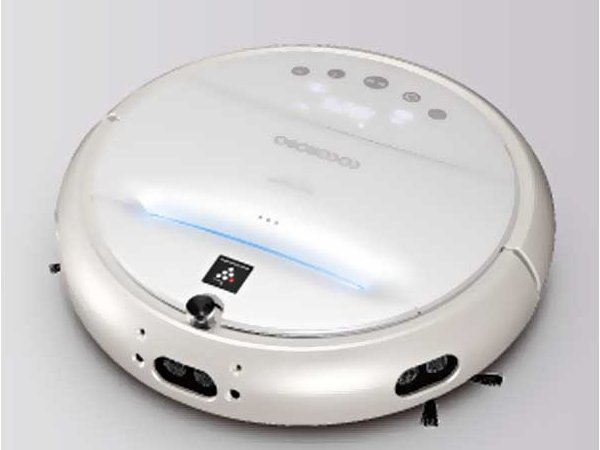 Both versions of vacuuming robots Sharp recently presented have the same characteristics, with some diversity in features they offer. Each robot weights 3.3 kg (7.27 lbs), and their dimensions are 34.6 cm (13.62″) in radius and 9.6 cm (3.78″) in height.

Presented Cocorobo vacuuming robots are equipped with 16.0V 3.0Ah rechargeable lithium-ion batteries which require 4 hours to be fully charged, and its operational time depends on the battery status and room conditions, but they stated it lasts about 1 hour when fully charged. The robot is able to automatically return to its docking station in order to recharge. Both models come with pretty much standard accessories such as remote controller, battery charger, cleaning brush, and 2 spare side brushes.

As a vacuum cleaner, Cocorobo has a Power Vacuum System developed by Sharp. The robot sweeps up dirt with side brushes, catches it with a rotating brush, and sucks it in with a turbo fan running at 14,000 RPM. Robot employs 3 ultrasound sensors to avoid obstacles. Located on front side of the robot, the sensors use the information of reflected sound waves to prevent the robot from bumping into things and prevent it from falling down the stairs.

Aside the difference in color of presented Cocorobo vacuuming robot models RX-V80-S and RX-V100-W, these two models come with different prices and features. Both models come with Sharp Plasmacluster 7000 technology which is used to purify air during their operation.

Sharp wants to develop a new line of home appliances that have personality and communicate with their owners, like housekeeper pets. Both models feature Heart Engine Artificial Intelligence which enables the robot to respond to its instructions in a more natural manner. The robot answers in combination of lights and 36 phrases in 4 languages. It speaks in Japanese, hip humorous Kansai dialect, Chinese and English language.

They operate in 5 selectable modes which are suited for different uses. In automatic mode, the robot tries its best to automatically vacuum the room. As other vacuuming robots with side brushes, Cocorobo also has problems when it has to climb thicker carpets, but it operates without problems on flooring and less thick carpets. In another mode, the robot is going along the walls of the room and performs more intensive cleaning of that area. It also comes with 2 modes where it cleans in spiral with a more thorough cleaning in diameter of 1 meter (3.28 feet), or centralized and nearly as effective cleaning of an area with 2, 3, or 4 meters in diameter. In its last mode, the robot just stands still and purifies the air.

The more advanced and expensive Cocorobo RX-V100-W comes with a 1.3-megapixel camera able to record in VGA resolution (640×480 pixels), an LED light, wireless LAN connectivity and voice recognition. Unfortunately, robot’s voice recognition is turned off during its cleaning and movement.

Sharp’s vacuuming robots can be remotely accessed via Wi-Fi network and can be controlled by iPhone and Android smartphones. The app enables you to take control of the robot and see the world through its camera, or check on your home and pets while you’re away. You can also relay recorded voice messages or sentences the robot would read to persons in its vicinity. An additional app which is sold separately enables you to check the temperature in the room and take photos.

Sharp plans to produce 4,000 full-featured Cocorobo cleaning robots which will sell for around ¥130,000 (US$1,600). They also plan to produce 6,000 of the more basic version which will sell for ¥90,000 (US$1,100). It will be available in Japan in early June, followed by sales in China and other Asian countries. Sharp wants to eventually launch in the U.S. and Europe, but they haven’t announced how soon that might be.