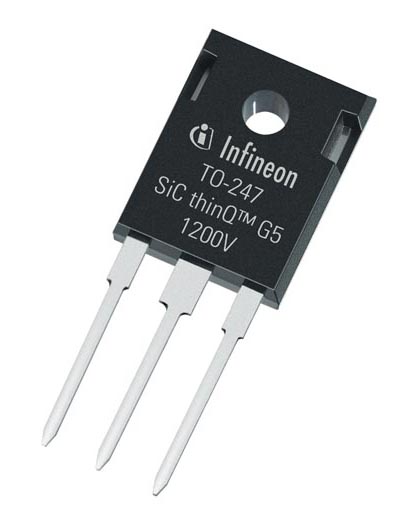 The “Generation 5” SiC diodes use a new compact chip design, realized by merged p-n junction engineering in the Schottky cell-field. This enables a smaller differential resistance per chip area. As a result, a reduction of the diode losses by up to 30 percent compared to the previous generation can be achieved; for example in a front-end boost stage for a 3-phase solar inverter operating at 20 kHz with full load.

At a junction temperature of 150 °C, the typical forward voltage is only 1.7 V, which is 30 percent less compared to the previous generation. This represents the lowest forward voltage available on the market for 1200 V SiC diodes. Therefore, the new SiC diodes are especially well suited for applications operating at relatively high load like UPS systems. Moreover, the system efficiency is improved even under low switching frequencies.

Depending on the diode ampere rating, a surge current capability now rated up to 14 times the nominal current ensures robust diode operation during application surge current events. This enables the elimination of a by-pass diode, thus reducing the complexity and system costs.

Implementing the new 1200 V thinQ! SiC Schottky diodes in combination with Infineon’s best-in-class 1200 V Highspeed3 IGBT in boost and Power Factor Correction (PFC) boost topologies brings significant benefits on system level. Not only the losses in the diode are reduced, but also the performance of the Highspeed3 IGBT is improved due to reduced turn-on losses (which lead to smaller heat sink or increased efficiency) and lower EMI (smaller cost-effective EMI filter) compared to solutions using conventional Si diodes.

The complete portfolio of the Generation 5 SiC diodes includes TO-247, TO-220 and DPAK packages. In addition, a new best-in-class 40 A diode in a TO-247 package as well as dual-configurations with common cathode enabling further space savings for interleaved topologies are offered. Variants in other packages will be introduced in 2015.